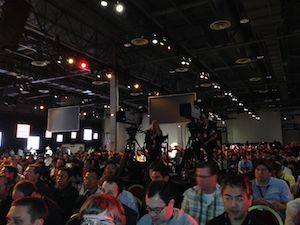 Amazon and their head of AWS, Andy Jassy, officially kicked off day 2 of re:Invent with a 90 minute keynote in a concert-sized auditorium packed with 9K+ attendees. He made a few interesting announcements, including AppStream, WorkSpaces, and CloudTrail (my personal favorite). He also took the time to espouse Amazon’s commitment to their customers, took a soft jab at IBM who is running ads on Vegas buses, discussed Amazon’s belief in continuously lowering prices, and pontificated on the AWS view of private / hybrid clouds. He handed the mic over to other speakers at various times in the keynote, including Jeff Smith, CEO of Suncorp, Stephen Orban, CTO of Dow Jones, Arzhang Kamarei, President of Tradeworx, Kevin Baillie, founder of Atomic Fiction.

My geek attention span started to wane after about 75 of the 90 minute keynote, so hopefully I didn’t miss anything important in the last few minutes. But it was hard to sit in that audience and not appreciate the velocity and scale Amazon has amassed with AWS (250+ new service / feature announcements year to date). It was also hard not to notice that this scale has resulted in them aggressively moving into new markets and taking on new competitors.

Overall, I would rate the keynote a solid B/B-, being a little too repetitive with last year, and missing a little of the thunder that comes with a big price break announcement. Also, while I enjoyed the speakers, the discussions about how AWS could enable enterprise agility was just a little off the mark for me. But I still have high hopes for Werner Vogels and day 3.

There were a lot of good sessions today and much of noise in the exhibit halls, but the biggest theme for me was an uneasy sense that Amazon may not have clear boundaries around competing with its rapidly evolving ecosystem. For example, Boston has been home to more than a few VDI startups, all of which I am sure have at least raised an eyebrow at WorkSpaces. The same can be said of AppStream, which seems to directly compete with partner offerings available today on the AWS Marketplace.

I’m not sure the accuracy of Brad Stone’s Everything Store, but in one chapter he described how Amazon entered the jewelry vertical in the late 1990s/early 2000s by deliberately watching how their own partners sold in the marketplace. One re:Invent attendee relayed a comment from a colleague that being an Amazon technology partner can at times feel like being the main character in the Truman Show, where you live in an Amazon constructed reality controlled from above. ;)

But my nagging feeling cannot sway me from my self declared AWS fan boy status. I think some coopetition is inevitable with the scope of the disruption in the cloud. But with Google becoming increasingly aggressive in directly competing with AWS, Amazon might want to remind itself of a relevant motto: “Don’t be evil.”