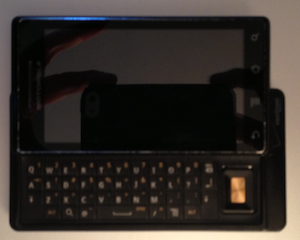 Over the years I’ve learned there are technologies I value, and technologies I do not. I value fast laptops, productive software development tools, consumer products that make my life easier, and great open source. I do not however value cell phones.I guess should correct that slightly. I have valued one cell phone in my life: my Blackberry 7200.

My first Blackberry came to me around 2002 via SilverBack founder, John Igoe, who extorted two free trials from an overly hungry T-Mobile representative. John wanted to see what this “BlackBerry thing” was all about, and decided there was no better way than to test it than our upcoming overseas trip. After arriving in Europe and meeting in a restaurant, we both promptly pulled out our Blackberrys. After 15 minutes of complete silence, we looked up awkwardly and John said: “Well this is different.”

I have owned several phones since then, but none that I valued like that Blackberry 7200. So it is with great shame that I will now admit that up until Thursday of this week, I have been the owner of a Motorola Droid. “Oh,” you say, “a Droid DNA running Jelly Bean?” No. “An HTC Droid?” Uh, no. “Then you must mean a Razr, right?” Well, not exactly. “A Droid 4? Droid X?” Nope and no.

Up until Thursday my cell phone has been a... Droid Original.

There was a time long ago when I did not think much about my Droid Original. After all, it was just an Android smartphone. But as the years went on, I began to notice the odd looks I received upon sliding out my retractable keyboard. I honestly think teenagers might have once mistaken my Droid for a rotary dial phone. Over time I had a sense of what Blackberry users have been dealing with these last several years: smartphone shame.

So on Thursday, I went to the store bought an iPhone 5. While it is light, bright and clean, I do not value it - well, at least not much. ;) So when you see me pull this iPhone 5 out in 2018, take pity on me and my antique phone.